Top
You are here: Home / Blog / Artificial Intelligence Will Not Replace Auditors – Yet

Artificial Intelligence is a term being used by some to spread the message that machines are going to replace the human workforce, including auditors. This is true—to an extent. AI has so many layers, definitions, and applications that AI can be confusing to understand. At its core, a simple definition is that AI is human intelligence demonstrated by machines.

The difficulty in understanding AI and its potential applications for auditors lies in precisely defining ‘intelligence.’ AI is a technology the audit world should more easily understand by replacing ‘intelligence’ with one of its synonyms – ‘judgement.’ 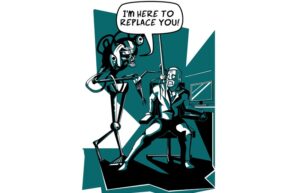 So let’s call it “AJ,” for Artificial Judgement. Redefining AI as AJ, and knowing that AI is human intelligence demonstrated by machines, we can more easily relate to it. Each time we say that auditor judgement was applied, we can ask the question, “Could a machine possibly apply that same judgement?” If the answer is no, then that aspect of the audit function, and all other risk functions, won’t soon be replaced by AI.

Applying judgement, or applying “auditor judgement,” a term that’s been prevalent in the auditor lexicon for years, is exactly what we, as audit professionals, do. We apply judgement when assessing risk, determining the scope of work, testing the design and operating effectiveness of a control, evaluating whether sufficient audit evidence exists, and when formulating recommendations.

This is where it can get confusing.

When reading about the areas in which we use judgement, you might have thought about the fact that you use analytics as part of the risk assessment process or for testing control effectiveness. That means we’re using AI, right?

Not really. Although that’s what some would have you believe.

A common way I see artificial intelligence referenced in the context of an audit is in testing 100% of the population rather than in taking a sample. So let’s apply this to a reconciliation control. Rather than taking a sample of reconciliations, we reconcile the entire account for the year. Regardless of whether the accounts reconcile, does it require judgement to determine so? I would argue it doesn’t require judgement, at least not the kind that should be associated with AI. Others will argue that because it does require some level of judgement that it is an example of AI.

Whether you agree or disagree doesn’t really matter. Being able to define it within the realm of an audit is what matters. Knowing AI isn’t replacing you is what matters. Can machines one day apply sufficient auditor judgement to the point they will shrink audit staff size? They could and probably will, but it’s not going to be any time soon.

If someone brings an AI solution to your company, or they implement one themselves, then ask what judgement, if any, the machine is applying. There’s the risk AI poses to your company – a machine applying judgement. If they don’t know or can’t say, then they’re probably just using it as a marketing term.

Search “AI audit” or similar and determine for yourself if what is being called AI is nothing more than data capture and analysis or if actual judgement is being applied by the software (i.e., the scary machines).

Use your auditor judgement to determine if it’s AI.

For more in depth discussion, check out our upcoming Data Analytics and Visualization for Auditors Webinar, which will be taught by Trent Russell on May 19, 2022.

The Data-Driven Audit: How Automation and AI are Changing the Audit and the Role of the Auditor by AICPA Canada